Welcome back, lovely readers, as we continue our descent into 2018 Pride Month with more wonderful books.

Today, I’m going to be trying something a little bit different for my book review. Maybe it was just me, but my last couple of reviews have felt more like book reports. Never ending university student problems, I guess. Let me know what you think. I love compliments and constructive criticism alike.

The book of the week: If I was Your Girl by Meredith Russo. 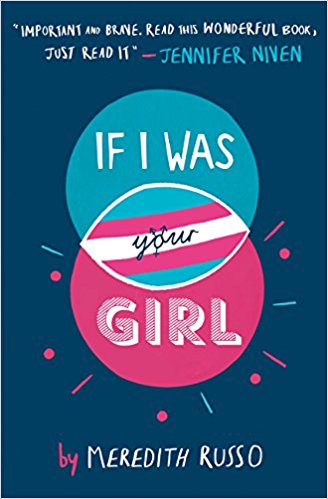 So, why this book?

The title itself did not pull my attention to it. It didn’t ring out as something that I had to read for Pride from the moment that I saw it. However, it didn’t take long for me to realize that it was something that I did have to read this month. One of the decisions that I made early on in my decision to focus on Pride Month was that I was going to include as many identities as possible with the books that I chose.

I already captured the more “mainstream” identities of gay and lesbian. I would even say that some of these works captured a potential for a bisexual identity, even if it wasn’t explicitly stated based on the time periods. These identities are something that were relatively simple for me to find content on. I already had some of them picked out when I started this book blog. Yet, I didn’t have any books in mind that included a person of some type of gender diversity. So, I did some research.

Well, research is probably too strong a word because the texts that I ended up choosing weren’t difficult to find. In fact, they were being featured in the LGBT category of my public library. If I was Your Girl was one of those books and after reading the description, I knew that this was a book that I would want to read even without my specific focus for a book that represented some one who is explicitly not cisgender. And can I just say? I am so freaking glad that I picked this book up.

So, what is it about?

The book follows Amanda Hardy as she starts her senior year at a new school in Tennessee. She has moved in with her dad after there were some issues where she was living. Like basically every other high school student, she is trying to pass her classes and make new friends as she navigates the new school. Yet, she wants to keep her distance because, while there is plenty to learn, Amanda has even more to hide.

Then she meets a boy, Grant, and the walls she built for protection start to come down. She wants to get to know Grant and allow him to get to know her. But can things be that simple? Amanda is terrified about sharing her past and her secret with him:

“It’s that she used to be Andrew.” – book jacket description

So what did I think?

It was beautiful and heartbreaking all at once. Amanda was an excellent character to follow through her journey of a new school. She is a someone that I was able to relate to because, you know, being a teenager is hard. It was also incredible to get a look at what it might be like to be trans. It is not an experience that I have had. I identify as a cis-woman as evidenced in my previous post. I was able to empathize with Amanda as she pushed through her struggles and worked through insecurities. We all have our hurdles to cross and Amanda was a wonderful character to bring this particular topic into my thoughts again.

A brief interlude: I have been involved in an amazing youth camp called Camp fYrefly (more information can be found here). I have attended as a camper, as a youth leader, and as a volunteer. Each return visit has brought new experiences and people into my life. I have met a lot of trans youth through this incredible camp and their stories came back to me as I read this book.

Considering that background, unsurprisingly, I found myself bawling at several points as I read the book. This is a no-spoiler zone, so I won’t spill any details. However, this is a moving book with a compelling story. Amanda is a character I would love to meet again.

Meredith Russo’s bio in the book indicates that it was partially inspired by her own experiences as a trans woman. That adds to my enjoyment of the book. This was not a book just written by someone guessing at these experiences. She has experienced, in part, what her character is going through. She may be only be one trans woman, but representation is incredibly important in this community. So, I am overjoyed to share this wonderful book.

I recommend this book to everyone who has every wondered about trans people. If you have ever questioned why someone feels like they were assigned the wrong sex at birth, this books humanizes that experience. It brings it alive in a way that people can empathize with and start to understand. I have already recommended it to my own brother and mother after a family conversation about sex and gender.

The other thing that I want to mention is the note at the end of the book.  Meredith included a note to both her cisgender and transgender readers. I don’t want to share too many details. However, if you read the book, make sure you read the note. It is as important as the text itself. It addresses some of the questions that you may have. I know that it did for me. So please read this book and the note from Meredith that follows.

Overall, FIVE out of FIVE.

Pride week in my city has started, but that only means that I am full into my pride month blogs. What’s to come, you may ask:

One thought on “REVIEW: If I Was Your Girl”

This site uses Akismet to reduce spam. Learn how your comment data is processed.